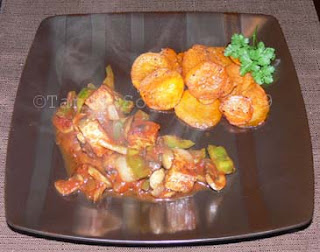 First I want to say I'm sorry for not posting anything the past 2 days.  I've been pretty busy with work and finally had some time tonight.  Might even have some time this weekend.....after checking out this week's farmer's market! 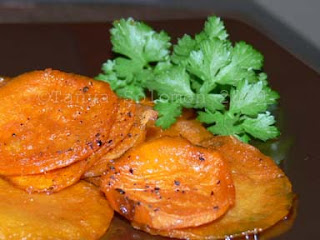 So the first recipe I did was a new one.  It's from  the Vegan YumYum cookbook: Candied Lime Sweet Potatoes. For my taste, it was a bit too sweet.  I even cut down the amount of sugar a little.  Next time, I'll cut it way down.  It was like eating candy....but maybe it's supposed to be???  I've gotta say, I'm not a huge sweet potato fan.   I think I've only ever made one recipe from them.  Some sweet potato salad, which was actually really good.  I'll have to find that recipe somewhere again if we get more sweet potatoes from the market.

I feel like I need to brush the candy off my teeth now....it's still lurking.  Also, I made it in a nonstick baking pan. Wonder if that was a bad idea.  The whole bottom is black from the caramelization of sugar.  Think it'll come off???  It's soaking, so hopefully. 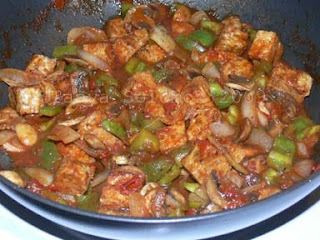 Second recipe I made was Tempeh Barbecue from the Kripalu Cookbook.  Excellent recipe!  I've made this one a few times before.  The taste varies a bit, depending on the kind/brand of molasses you use.  Some are stronger than others.  I added green pepper this time, because I still had plenty and we're getting more at the market tomorrow. And I use crushed tomatoes instead of tomato sauce.  If you've got tempeh and mushrooms on hand, you HAVE to try this recipe!

Wow, that's it I guess.  We've got leftover tempeh for tomorrow, yay!  Was thinking of making a potato/turnip salad for lunch tomorrow, since we still have more turnips from the market.  We'll see.