Pattypan, pattypan, bake me a pattypan! 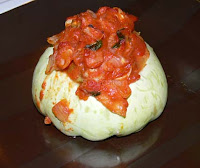 Today, I have no recipe for you, only a link to a recipe I found, with my minor adjustments. Remember how I had no idea how to prepare pattypan squash, which I got in my CSA box last week? Well, it's such a tasty food! So juicy and it makes the kitchen smell like cinnamon.....not sure why (I didn't add cinnamon to the recipe). It smells like Thanksgiving in here!!
Here's a link to a recipe for stuffed pattypan squash: http://mommygourmet.blogspot.com/2009/08/stuffed-pattypan-squash.html 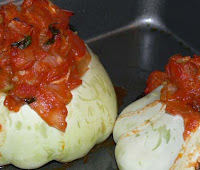 I slightly adapted it for my own taste (and I had no feta!).
First, I put the 2 squashes in a pot of boiling water for about 10 minutes. Instead of feta, I used a little monterey jack. I also added a little cajun spice for some kick. And since I had okra in the fridge, I cut up some of that and added it to the skillet of tomatoes and onions.
I thank her very much for this tasty recipe. Really, if you've never had pattypan squash, now's the time! You could probably also make some sort of cinnamony, nutmegy (are those words?) filling too....would work well I bet.
Ok, I'm going to wrap up this post now. Enjoy your dinner :)
Eat smart,
T.
Posted by Tanya at 5:27 PM