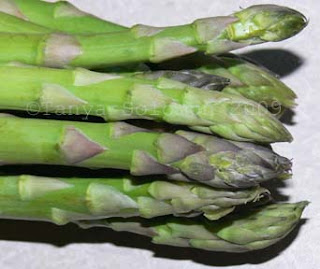 BUT, today I added asparagus and white button mushrooms because I had to use up the mushrooms already (they'd been in the fridge a while) and asparagus was on sale! So that's my excuse. I also had to use up my tomatoes from last week's market (I'm sure I'll pick up more tomorrow). By the way, is it a stalk of asparagus or what? Does a "bunch" have several stalks? 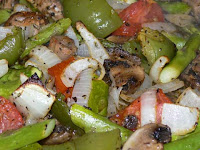 And even though I still prefer my traditional roasted tomatoes, onions, and peppers, you can make it with pretty much anything! Next time I'll post my recipe for roasted cauliflower and broccoli a la lemon, with lemon israeli couscous. Good stuff. 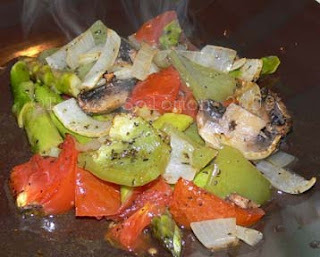 It's gonna be a rainy weekend all around. So don't expect too much from me. We're still going to try and make it to the market tomorrow for our produce box (I think there may be more pattypan squash!!!!), you know....after we stop at Barnes and Nobles to pick up a few vegan cookbooks I've been drooling over. (no, I'm not vegan)
Ever since I had the most amazing vegan chocolate cupcake with peppermint frosting at The Tomato Head in Knoxville, TN, I've had cravings for vegan cupcakes. If you live anywhere near there, I highly recommend that place. The meal was perfect! With great local beer to go with it...on tap!
I can't get anything vegan here.....
Hmmm.....maybe tomorrow I'll make a list of my favorite veg-friendly restaurants from our travels!
Until then, happy eating.
Eat smart,
T.
Posted by Tanya at 6:34 PM