Catching up over the weekend

Sorry I haven't been able to post.  Haven't felt up to it.  Couldn't sleep last night either...waking up every 45 minutes coughing.  I think I feel a little better today.  We'll see when nighttime rolls around.  That seems to be when it's at its worst. 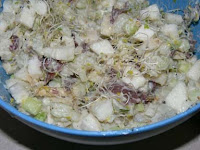 Ok, on to the food then.  On Saturday night, I made my Potato Salad Oregano, but added raw fresh white turnips I'd gotten at the farmer's market.  I just cubed about 4 medium to large white turnips and put them in.  I don't think my husband was really into it. (I guess that's why there's so much left...more for me!)  It grew on me.  It was different.  I thought about cooking the turnips first, but decided I wanted the extra crunch instead.  I might consider cooking the turnips next time, but I liked it this way.  You can try whatever you want....let me know if you cook yours first. 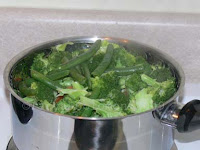 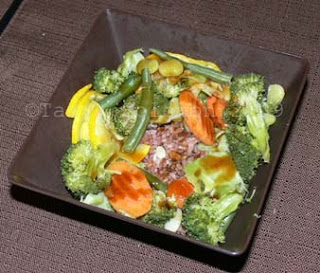 Next: the Monk Bowl.  I'm really excited about this.  I found the idea on the Hungry Vegan's Blog.  She wrote an interesting article on Dr. McDougall.  So interesting, I went out and bought one of his program books and a cookbook of his.  She mentions this Monk Bowl, which you can find here.  There are a ton of different variations.  I decided to make one last night.  I made the Monk Bowl with the Asian-Ginger Sauce.  I used a mix of red and brown rice and steamed: green beans, carrots, broccoli, golden zucchini & yellow squash.  Different vegetables steam at different times, so add accordingly. Also added the lima beans I had just cooked that morning (I just put them on top of the other vegetables in the pot for the last couple of minutes of cooking).  I left out the tofu.  I have to say, it was SO good!!  I'm excited to try all the other variations too.

It was so good, we're having it again tonight (leftover rice and sauce).  I just have to steam up some vegetables.  I just started reading his book, and there are some things I don't agree with (there's always going to be something), but that's ok.  I like a lot of his ideas.  Basically, he tries to avoid all added fats (well, there's going to be some fat in your food, which is ok), meaning no oil!  That's probably the hardest thing to avoid, if you cook a lot.  He also doesn't like nuts....not sure why, except that they are high in fat.  But I'm sticking with my almond milk (especially since I just bought a case of it online!).  He uses rice and soy milk.  All of his recipes are vegan.  I still like my cheese once in a while and some yogurt too.  He concentrates on complex carbohydrates (seems to be the opposite of the Atkins diet).  Anyway, we'll see how it goes.

Back to work tomorrow.  Hopefully I'll be able to post something in the next few days.
Eat smart,
T.
Posted by Tanya at 4:36 PM