Ok, wow....so today I did two meals.  BUT.....the first was from (mostly) the McDougall cookbook I have.  Dinner was my own concoction....but was pretty darn good, if I don't say so myself! 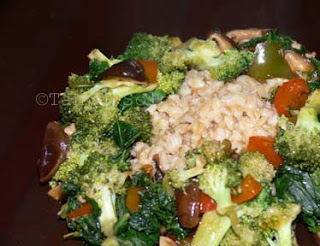 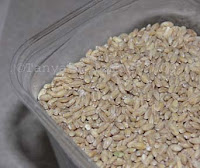 Let me start with lunch.  I made the Broccoli-Barley Toss from "The New McDougall Cookbook".  I only changed a few things.  First, I added kale, because I love kale! Second, I used Shiitake mushrooms instead of regular ones (actually, he doesn't specify, to be exact).  I didn't have snow peas or bean sprouts and I left out the green bell peppers.  I think that's it.  And technically, I didn't toss it!  I put the vegetables on top of the barley.  It was very good, but it could've used just a bit more flavoring.  Maybe next time I'll use real ginger and something else.

On to dinner.  I still had some eggplant left...I had already sliced it and put it in a bag, raw.  I'm really not a fan of eggplant....I'm sure I've mentioned that before.  My husband wanted me to make something with it....something with tomato sauce and something spicy.  So I did.  And I actually liked it!  It tasted very much like eggplant parmesan, except there was no cheese in it.....it was vegan! 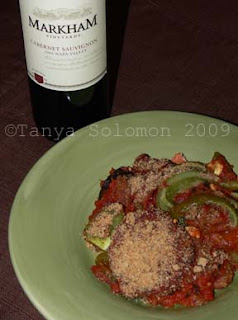 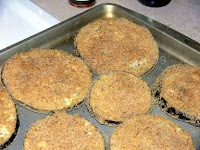 
Put the eggplant in a colander and sprinkle a lot of salt on it.  Let it sit for 30 minutes to draw out the water/bitterness.  Rinse, dry, and set aside.  Spray a bit of oil on a cookie sheet.  Mix the breadcrumbs with the seasonings (unless you have pre-seasoned crumbs), to taste.  Put the almond milk in a bowl.  Dip the eggplant in the milk, then cover with breadcrumbs.  Lay them all out on the cookie sheet, single layer.  Broil about 7 minutes on each side. 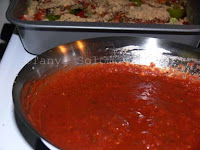 Spray a little oil in a 9x13 pan.  In a large bowl, mix the tomatoes with the spices (unless you are using jarred sauce, with seasonings).  Spice it up!  It's really good spicy.  Put about 1/3 of the sauce at the bottom of the pan.  Lay half the eggplant down on top of the sauce.  Then add the peppers and squash.  Pour more sauce over it.  Then add the basil all over the top, followed by the rest of the eggplant.  And top with more sauce.  And sprinkle a good amount of seasoned breadcrumbs all over the top.  Bake at 350 degrees for about 30 minutes.


I made some extra red wine sauce to go on top, but as it turns out....we didn't need it.  There was plenty of sauce in the baked dish.  You could add zucchini, onions...etc...if you want. 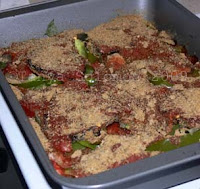 We invited our friend, Dave, over for dinner.  I think it was maybe a bit too hot for him.  But if you like it spicy, go for it!  I hope I didn't forget anything because I never write this stuff down.


I forgot, I made some hummus as an appetizer: 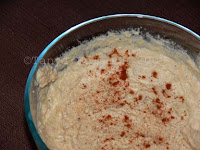 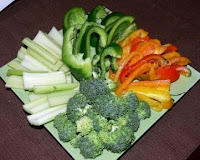 
Blend it all together, add a little paprika and it's done! Served it with some raw veggies.


And I guess that wraps it up!  Still going to make millet soon......maybe tomorrow?