There are vegan things happening in New Orleans. Who knew? Well I certainly didn't, until recently. John Morales has been cooking up a vegan storm. A couple of weeks ago, I was able to attend one of the weekly Sunday Brunches (O! Vegasm) he runs over at Grits Bar. Ok, the area is a bit suspicious, but the food is amazing! It's actually a pretty large space and they reserved the whole back section (which was also smoke-free) for the brunch folks. We got there and O'shea Cleveland was our server. Very nice lady. We had seen her previously at the Hollygrove Farmer's Market, which I will also post about. We got our menus (although they really only serve two things and you get them BOTH!). 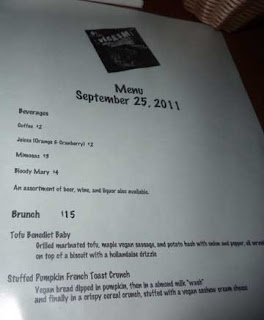 You wouldn't believe how much food it is. I would've been satisfied with just one of the options. It's like you get two meals for $15! Now I have to tell you I don't eat like this normally, so I can't go every weekend, or I'd gain a million pounds. But, I do have to say that it wasn't all that heavy in my stomach when I finished :)

Here's the Tofu Benedict, which was so delicious...loved that sauce and potatoes..everything: 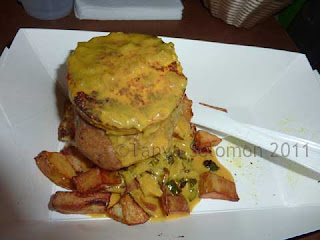 The other part was the Pumpkin French Toast stuffed with a cashew cream cheese: 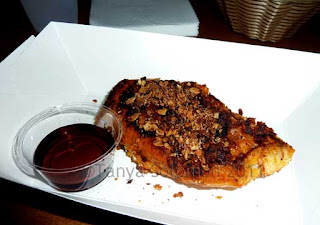 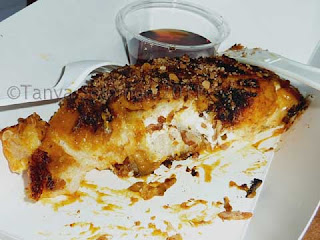 (here you can see the cream cheese. I LOVED it!)
Pssst, John, still waiting for your secret about that.
I didn't order the coffee, because they only had almond milk, which I'm not a fan of in my coffee. I'm pretty partial to soy milk or soy creamer in my coffee, though I love almond milk for other things. There's also a full bar, though the beer selection isn't very good. If you're ever in New Orleans on a Sunday, you must try it!!
I was at the Hollygrove farmer's market a few weeks ago on a Saturday when O'Shea was serving some vegan food, so we decided to have our lunch there. Now, I'm not sure if she cooked it or if John did....but anyway, it was delicious. Again, not what I'd eat everyday, but still. I HAD to try it at least :)
There were two options, so we each had one. Here's the Fried Chik'n with whole wheat biscuit: 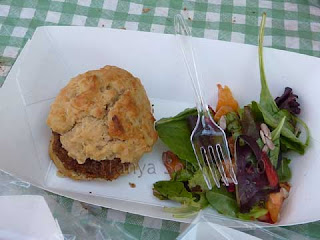 (very good. The biscuit wasn't as salty as they usually are and it was excellent! S said it tasted like a real fried chicken patty, but seriously, what does he know? It's been years since either of us has tasted real chicken.)
And here's the Broccoli Quiche. Also delicious. 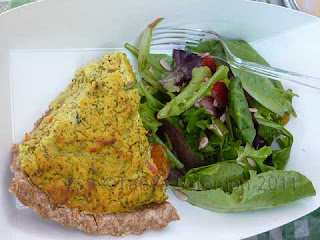 So as you can see, there seems to be a vegan community hiding here in New Orleans.
On a similar note, John Morales also makes baked goods, I hear,  for Hey Cafe and a few other places. Unfortunately for me, none of these places are near where I live :( But I will make the occasional trip into town for a Sunday Brunch. There is also a Vegan Drinks New Orleans, which I've not made it to yet. But alas, it's also at Grits Bar. And since I'm partial to good beer, and they don't really have much, I'm not sure I'll make it. Oh yeah, and I'm also not sure I want to go into that neighborhood at night. But we'll see.
You should check out O! Vegasm's Facebook page, as well as Vegan New Orleans for more info!
I still wish there were a health food store somewhere near me.....that wasn't a Whole Foods. Well, we can't have everything. How about a Trader Joe's?? I'll take one of those please.
Eat smart,
T.
Posted by Tanya at 4:04 PM