This morning we had some symphony "kiddie" shows and we decided to have lunch nearby at Hillel's Kitchen, immediately after the shows. If you check out their website, you'll find a complete menu and it specifies exactly what is vegan and gluten free (V & GF). Though take note, the place opens at noon M-Th, NOT 10 am, as specified on their website. I noticed this on their current menu in the cafe today.

The cafe is inside Tulane University's Hillel Jewish center, which is a very new, bright yellow building. It's all very clean with wood floors and funky bright green chairs. The tables are all large, so you can't really grab a small corner table for one or two. We were in there around 1 pm and there weren't too many folks in there, so you could've taken a large table for yourself. 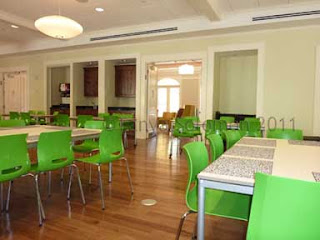 You order at the counter, pay, and wait for your number to be called to go pick up your order. The menu doesn't seem to really have any big entrees on it. It's mostly sandwiches and salads, with some great looking breakfast items, served all day (vegan granola, vegan bagels & cream cheese, etc.) and snack food like chips/salsa and guacamole.

I ordered the Roasted  Sweet Potato and Pesto sandwich (marked as vegan). It wasn't huge, but was quite enough. I don't usually eat that much bread anyway. Surprisingly, it came with some sort of a BBQ sauce on the bottom AND the pesto on the top. Just a hint of spiciness with a nice mix of sweet and salty. A very good sandwich! I'd order it again. It was served with a pickle, which to my surprise, was pretty darn sweet.  I wish they had some sort of whole grain bread, but it seems they only had varieties of white bread. Same with the pita, it seems (though the pita is straight from Israel). 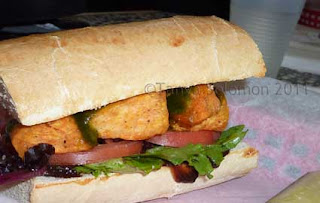 S got the Roasted Beet and Lentil Salad (also vegan). I thought about ordering that too. Good thing I didn't...it had olive bits in it (I HATE olives). Wish they'd specified that on the menu. Anyway, he loved it. I tasted some of it..without the olives, and it was good. I suppose I could just order it without the olives now that I know they're in there. 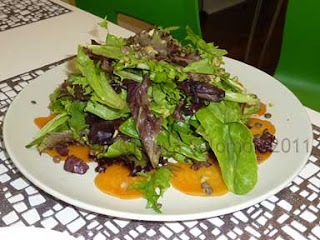 For dessert,  I ordered the Almond Chocolate Chip Cookie, which is both vegan and gluten free. I must admit, it was quite sweet. Much sweeter than I would normally eat, but once in a while is ok with me. It was very crunchy. Would have been nice with some coffee. The cashier did say there was some free coffee in the lounge, just around the corner (a few feet away). She wasn't sure there was any left and I wasn't sure how long it had been sitting there......so I didn't try it. Maybe next time. I think the cafe has almond, rice, and soy milks for their smoothies (according to the website), so I'm sure you could use some in your coffee. 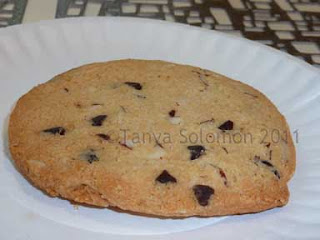 I picked up a couple of house-made vegan bagels with some vegan cream cheese on the side to bring home. I was impressed that they made their own bagels (albeit white flour). That reminds me, I should make some bagels soon. I haven't tasted them yet, but I'll update this post when I do. I meant to try their roasted tomato soup (vegan) that was on the website, but I either forgot or didn't see it listed on their in-cafe menu. Maybe next time. 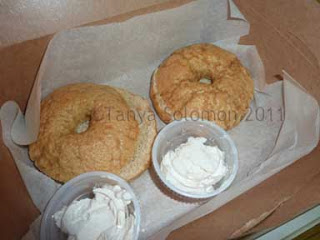 Overall, we had a good time. Good food, a nice, clean, atmosphere, not overly pricey. The chef, Harveen Khera, introduced herself to me while I was ordering. Very nice woman. You should read about her on the Hillel's Kitchen website. She even told me about tomorrow's vegan special...I think it involved quinoa and sounded amazing! Unfortunately, I can't go in tomorrow :(  I will, however, be following them on Twitter, to stay updated on their specials.

Don't be afraid to step into the Hillel Jewish Center. No need to make a face when you hear "kosher restaurant"! This place is coming along nicely. I'm excited to go back and try something else (or get that awesome sweet potato sandwich again!).  If you're in the New Orleans area, do stop in for some good vegan food!