Catching up and lots of pics

Hey everyone! So sorry for not having posted in over a week.  And just to let you know, there won't be much posting over the next month.....but hopefully I'll be able to at least post some pics from various travels and eats. 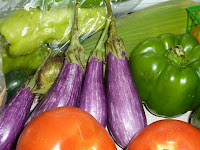 I was a bit angry, as I noticed that the poster for my blog had been taken down at the market.  Grrrrr......not too happy about that. At first, I gave them several copies, to put on the table so people could just take them.  They decided it would be better to hang just ONE on the wall. I didn't think so....who's gonna remember the website? Anyway, now there's nothing and I know they still have several copies, unless they threw them away.  I don't think I'll say anything though......usually I would, but since I shop there every week....probably not the best idea. What do you think? 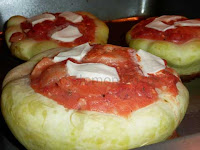 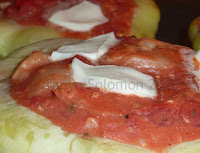 I made some of the pattypan squash from the previous week into that stuffed pattypan I'd made before.  You can find it here.  This time I used up the rest of my Teese mozzarella. Didn't melt as well on top, but melted really nicely when mixed into the hot stuffing. Still tasty though :)

Still have a ton of yellow crookneck squash, even though I've tried to sneak it into whatever I can (husband doesn't like it).  Can I puree it and freeze it? Maybe to make salad dressing out of it later? Any ideas? 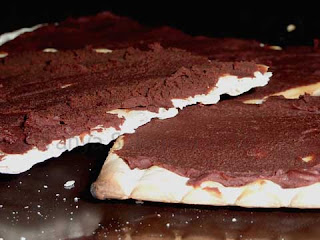 Chocolate spread on matzoh! When you're craving sweets, you gotta do whatcha gotta do! Take a handful or more of vegan chocolate chips and put them in a bowl, into the microwave.  Heat them on high for 30 seconds at a time, mixing after each.  Add in a few drops of non-dairy milk and nuke another 30 seconds.  Make sure it's nice and smooth.  Work quickly and spread it onto your matzoh.  Put it in the fridge for several minutes to let the chocolate harden and there you have a nice quick dessert!

Cucumber noodles with raw marinara (my husband preferred the zucchini, but I found cucumber pretty refreshing): 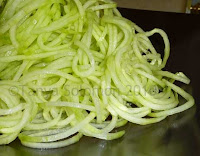 I made Averie's Raw Vegan Chocolate Chip Cookie Dough Balls, although to me they were more like oatmeal chocolate chip.  They are incredible!  I made them twice and the second time, I actually did 1/2 cup oats, 1/2 cup cashews and only about 1 Tbsp of sweetener.  Still incredible! Thanks, Averie :) 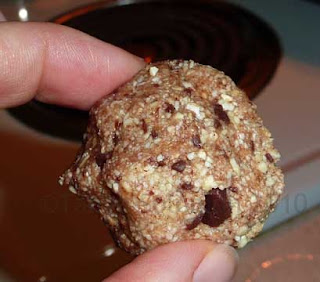 I made some Golden Zucchini Bread again. See my original post about it here. This time I added raisins, used all spelt flour, and it was REALLY good! 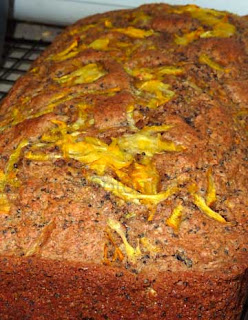 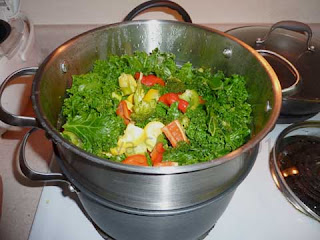 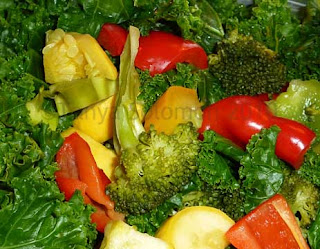 Made some guacamole: 2 avocados, 1 chopped tomato, some cilantro, salt, and lemon juice, all mashed up together. 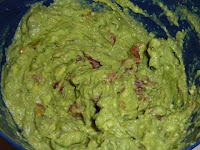 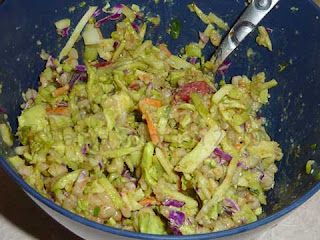 Made Choosing Raw's Zucchini Dressing (with golden zukes, since that's all I had) and it's really delicious! (her Tomato Curry Dressing is great too) 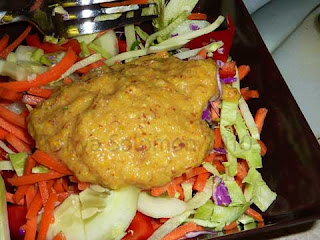 Cooked up some red quinoa and mixed it with a ton of chopped vegetables, added some balsamic vinegar, salt, pepper, and garlic for a great dressing. 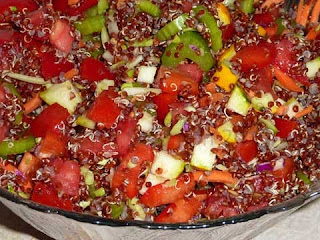 And last, but not least, I made up some of that great Tempeh Barbecue (used shiitakes this time): 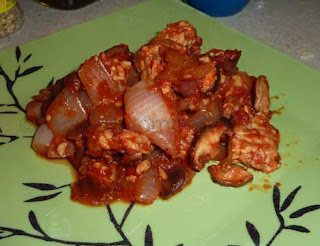 Ok, I think I'm mostly caught up. It's been really hot here...in the mid 90's with high humidity.  Still trying to get my walking in, though.

Still contemplating the blender vs. food processor situation.  But...I think I've decided to wait on the Vita-Mix because it's so dang expensive.  I'm going to get a large food processor and get some sort of small cheaper blender. Any suggestions? Something good for salad dressings, smoothies (that can handle frozen fruit) and sauces.

Blogger of the Week: FatFreeVegan.  She's got TONS of recipes that are right up my alley: fat free (or lowfat) and vegan, yay! Check her out. This was one of the first blogs I ever started following.