Lots of recipes to share today, although only a half of one is my own....sigh....but all very good. 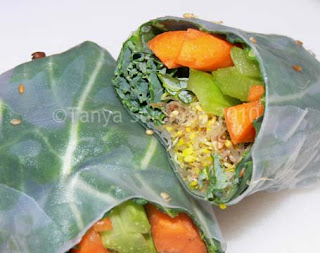 Let's start with my own: Veggie Spring Rolls 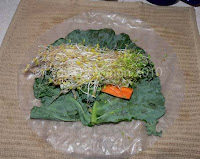 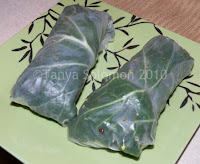 Follow the directions to prepare the wrappers.  Lay a collard leaf on top of the wrapper, dark side down, then top with half the vegetables on top. Roll it up and fold the sides under. Don't worry, it sticks together by itself.  Do the second one exactly the same.  Serve with dipping sauce.


I made Averie's Peanut Sauce. Here's my version:


Stir it all together.  At first, mine was a bit too acidic, between the vinegar and oj, so I added a few tablespoons extra water. But it's a delicious sauce for anything! 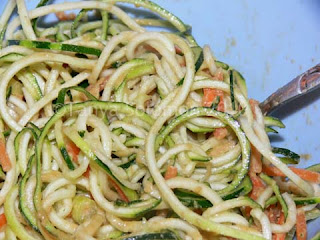 I made the zucchini "noodles" again, but this time with my version of Averie's Peanut Sauce. And I added whatever other vegetables I had, like carrots, celery, and green onions, chopped.  It was really tasty.

Last night for dinner, I decided to make a recipe with Arame (Sea Vegetable), since I had recently bought some and had no idea what to do with it!  I came across this recipe on VeganChickie's blog. The recipe itself is from TheBlissfulChef, Christy Morgan: Mustard Arame Saute. I had tempeh, I had arame, couldn't have asked for a more perfect recipe :) 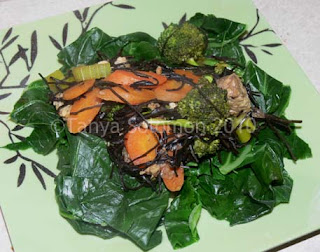 I left out the oil and I left out the asparagus (I didn't have any). Just add more of the other vegetables. I served it atop boiled collard greens.  And I have enough tempeh left to make another batch in the next day or two, yay!  Anyway, a top notch recipe, in my opinion.

There's a giveaway going on at the EmbracingBalance blog for Crofter's Organic items. Check it out!
AND another giveaway on Averie's LoveVeggiesandYoga blog: Win a raw "cookbook"!
A blender giveaway: Raw on $10 a day. Yay!

Blogger of the Week: An Opera Singer in the Kitchen She's a fellow musician and has some really great recipes on her site. Go have a look.