A trip to FL/Disney with food pics

And so I begin this story by saying....this trip sucked!  Yup.....let me explain.

(I promise there are pictures further down)

We left on Sunday morning, around 4:45 am (my husband likes to leave on the early side for a long drive).  I think we stopped at a Cracker Barrel for breakfast....we both got oatmeal.  We stopped at a Ruby Tuesday for lunch.  I got the veggie burger mini (no cheese, no bun) and the salad bar. Did I hear that the veggie burgers there are no longer vegan??  Because it was pretty good....and much better than their old veggie burger.

So we got to Kissimmee and checked into our hotel.  I had pricelined it and got a bid accepted after about 15 tries.  I should've taken a hint.  I got the price I wanted, but the hotel (which looks great on the website), was really old and huge (720 rooms) and a big maze.  I mean, we had to drive to the closest parking lot to our room/building after we checked in.  Then to find our way back out to the lobby was another quest.  But, I digress.  The room was so old, the doors could barely open and close.  We actually had to kick it in to get it open and then slam it shut.  (I guess this accounts for the noisy door slamming all night).  I had called to see if we could get a king room, as opposed to the double beds and they said they didn't have any more.  However, I went to the reservations online, and it was going to let me book a king room, so I don't know what the deal was.  I guess they just don't want to give priceliners anything they didn't pay for.  That night, we were tired from driving 12 hours....we walked over to the hotel restaurant to see what they had.  It was closed!!!  We asked in the lobby, and they said the restaurant is only open for breakfast......the website says otherwise.  Lame.  So we walked onto the main drag (192) and checked out the restaurants.  I forgot it was Valentine's day (well not really), and the places were totally crowded with really long waits.  AND....they didn't have much for us to eat, except for the place with sushi.  But when we went in and asked, they said they weren't doing sushi that night, because they had a Valentine's special instead!  Boooo.....

So we got in the car and started driving.  As it turns out, we found an Uno Chicago Grill wihout a wait...and we were expecting the worst, from previous experience (several years old).  They were very friendly and sat us right away.  The menus actually had food on there we could eat!  There was a nice Vegetarian Moroccan Curried Rice and Lentil Soup (very tasty)...my husband got that.  I ordered whole wheat penne with tomato sauce (I was surprised they had whole wheat!). This was a treat, because I don't eat that much pasta anymore. They did have another vegetarian soup on the menu as well as pizza made with a 5-grain crust (whole wheat, flax, oat bran).   They also offer a veggie burger (I checked out the ingredients and they have egg whites in them) and a vegetable-feta wrap (you could get it without feta probably). Anyway, you can check out their nutrition labels here.  And to top it off, they had some great beer on tap!

I brought oatmeal, cereal, almond milk and a little creamer.  I put the oats into the bowl and brought it downstairs, looking for the microwave the hotel told me they had in the lobby.  Apparently, it's in the diner, and you can only use it when the diner's open.  Smart.  Well, the diner was almost open, so the lady inside let me in to use the microwave.  Grrrr.....I also bought myself a coffee there....$3 for a small!  Went back to the room and ate my cereal and coffee....the oatmeal was for my husband.

We arrived at Epcot Center (yes, the hotel had free shuttles and free parking...the only 2 good things).  We stood in line with our tickets.....and when we finally arrived at the ticket taker, it didn't accept our tickets. What??? We came all that way and the tickets didn't work?  Well, as it turns out, we brought the wrong tickets...yup, our own fault.  Not sure why we saved tickets that were used.  Apparently, our tickets with 2 days left on them were still sitting in our safe at home.  STOP LAUGHING.  We didn't think it was funny....at the time.  So then we had to go and stand in yet another line, just to buy tickets.  We couldn't very well leave, since we'd paid for the hotel and we were already at the parks!  So there went a few hundred dollars extra we weren't planning on.  And they weren't even parkhopper tickets, so we had to do one park only each day.

Anyway, Epcot was good. We always like the world showcase.  Let's get to the food, shall we??  Based on the recommendations online, we went to Morocco for lunch.  We got the vegetarian plate, although the cashier at first told me I couldn't have it (as a vegan), but then said she'd go get the chef.  Eventually, he came out (after about 6 minutes of waiting) and said he could make one vegan for me.  So that worked out.  Here's my veggie plate: 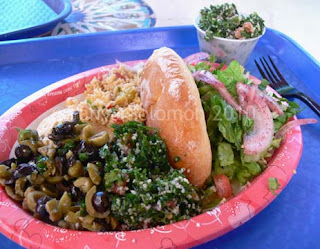 Ther was hummus, salad, tabouli, couscous and olives (which I gave to my husband, because I hate them). It was really good and filling.

We went to Mexico to make reservations for dinner.  In the afternoon, we stopped for a beer at the UK.  Great taps. I got a Bass and my husband got a Guinness.  Sooooo good. 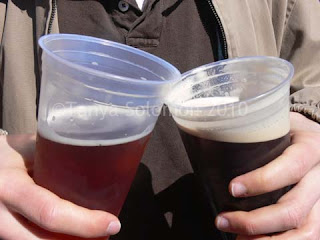 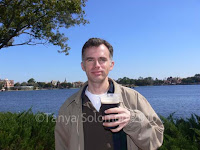 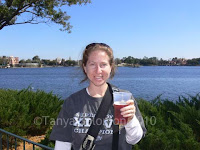 There we are, beers in hand :)

Finally at dinner, we went to Mexico.  I asked if they had anything vegetarian and the waitress brought out the "vegetarian menu" which I thought was hilarious, but thoughtful.  Here's what it looked like: 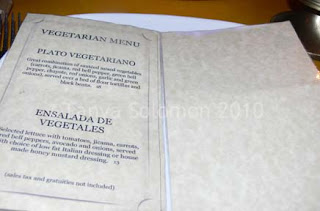 Yup, two items on the menu.  So we said, we'll take one of everything! :)  I got the Plato Vegetariano and my husband got the salad.  I ordered mine with corn tortillas instead of the flour tortillas.  Here they are: 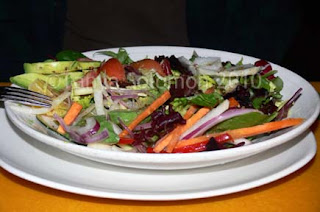 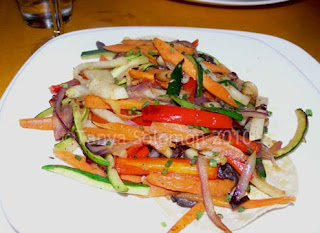 Mine was actually amazing!  The flavors were excellent.  You can't see it, but there are black beans and corn tortillas underneath the vegetables.  I'd go back and eat that next time.  The salad was good too. And of course it wouldn't be dinner (for my husband) without wine: 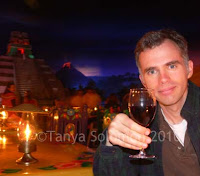 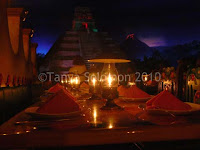 I always love the setting inside Mexico.

That night back at the hotel (and every night) was really noisy.  We barely slept...did I forget to say that my husband got a flu too?  Yup....started on the drive over.  So on top of that, people were slamming doors, the hotel was vacuuming at midnight...etc.....awful.

Why oh why did we choose to go to MK?  Sooooo crowded.  And by noon, we were done and were just sitting around.  But, we did go eat lunch at the Columbia Harbour House, from recommendations I'd come across online.  I got the veggie chili and it came with chips.  I spotted some little containers of unsweetened applesauce and asked the guy if I could have one of those instead, but he just gave it to me! How nice.  My husband got the Lighthouse Sandwich and without the broccoli slaw, is vegan I believe.  He got it whole though....since he's not vegan.  I did taste it and it was really good.  My chili was really good too, not watery at all, like it may look in the picture.  And there was plenty of food to fill us up.

I also found the Tofutti ice cream at the Ice Cream Parlour (they have Rice Dream as well, but not in chocolate).  This was hilarious...as soon as I asked for it, they yelled back "ALLERGY!!!!" as loud as they could.  It's quite an event there, LOL.  It took about 6 minutes or so of waiting after we paid, but we got it.  And it sure was tasty :) 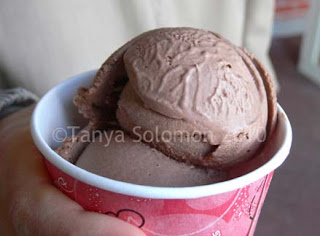 We tried to go into Guest Relations to make some sort of reservation at Ohana at the Polynesian.....no luck.  Totally booked.  So we decided to take a chance and just show up at the Polynesian (I'd never seen it) and just have a look around at least.  We got to the Ohana counter and the guy said they'd been booked for 2 weeks already! Like there's any way I could've planned that far in advance.  Guess we weren't going to taste any of famous Chef TJ's vegan food afterall.  We put our names in next door at the Kona Cafe and went to the bar for a beer.  We both got Hawaiian beers. Mine was a lager and my husband got a Pale Ale.  Both were excellent. 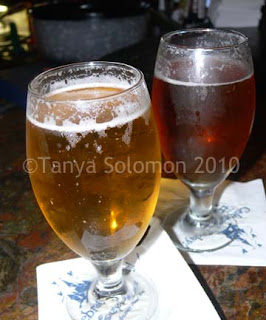 Oh but before that, I walked over to the Kona coffee area (where they were supposed to have great coffee), but they said they were closed until 5 pm (they must have a period before dinner when they close to switch over to a sushi bar).  Weird.  Anyway, I went back later to ask if they had soy creamer and the answer was no.  Boooo.....

We sat down for dinner and saw that the cucumber roll could be veganized. Now let me start by saying.....I'm scared to know what would not have been vegan in a cucumber roll? The rice? The nori?  The cucumber???? Eeek.  Anyway, my husband ordered that.  I got the Pan-Asian Noodles which the waitress said could be veganized.  I asked for it with just the vegetables....it came out with tofu in it....oh well. I gave most of the tofu to my husband :) But it was still very good. 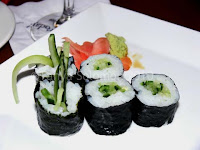 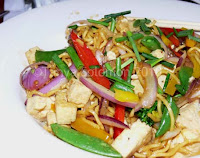 Hmmmm, is that it?  So the next day, we had originally planned to continue down to Miami to visit friends, but my husband was too sick.  So we drove home on Wednesday....all day.  We stopped at a Cracker Barrel for lunch and I got a baked potato with nothing on it (but I forget they salt the outside of it....a lot!) and some sourdough toast with their natural apple butter.  It was really good actually.  For dinner, we stopped at Ruby Tuesday and yes, I got a plain baked potato and the salad bar.  And like I mentioned previously, my husband was kind enough to stop at this great health food store in Mobile, AL on the way home, even though he was sick.
Oh wait, I have to say I got a good cup of coffee after searching the whole park.  At the American Adventure in the World Showcase at Epcot......they actually had soy milk!!! It was a pretty good. None of the other coffee stands had it...not Italy, not Morocco, etc.  And, people kept mentioning these "Divvies" cookies, but I asked everywhere and nobody had any....so I'm not sure where they were hiding.
Wow....that was long.....sorry about that.  I had to get all that off my chest.  Done. But I hope it helps someone who's looking for decent food when in Kissimmee/Disney.  I never got to eat in my favorite place: Sweet Tomatoes. Sniff....maybe next time.
Thanks for taking the time to read all that (or skimming, or scrolling down to the pictures).
Eat smart,
T.
Posted by Tanya at 3:53 PM