The winds are picking up and I see the outer bands of Ida are making their way through the area.....and it's getting darker outside. I better hurry up with this post.  Good thing I cooked a bunch of rice and potatoes, just in case the power goes out :)

I had to use up my last eggplant, which was really starting to get oldish, and the last 2 big portobellos I had.  So I decided to make some sort of vegan lasagna, even though I had no "cheese" filling.  I had some whole wheat lasagna noodles I bought a couple of weeks ago. 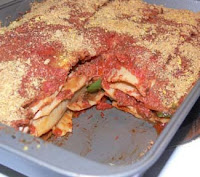 (same ingredients as my Eggplant Parmesanless except I left out squash and basil)
plus 2 large portobello caps, sliced thinly
raw kale(however much you want)
1 box of uncooked whole wheat lasagna noodles
1 tbsp of nutritional yeast 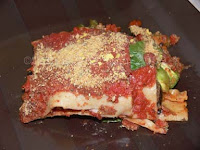 Prepare the eggplant exactly as on the Eggplant Parmesanless, broiled and all, and set aside.  Cook the lasagna noodles as the package directs.  When cooked, I like to lay them out on kitchen towels to dry, so they don't stick together.  Prepare your baking pan (9x13) with just a slight spray of oil.  Make the same sauce as in the Eggplant Parmesanless and spread some onto the bottom of the pan.  Layer 1/3 of the noodles  onto the sauce.  Then layer 1/2 the eggplant on top of the noodles, followed by 1/2 the mushrooms, kale, and green peppers (I used 2 small green peppers total).  Add a layer of noodles, with some sauce on top of it.  Sprinkle the nutritional yeast on top of the sauce and then add the other half of the vegetables.  Follow with the last layer of noodles and sauce on top.  Then, top with the breadcrumb mixture from the Eggplant Parmesanless (you can add a little more nutritional yeast to the breadcrumb mixture if you want).  Bake at 350 for around 30 minutes if you like your peppers a little crunchy.....maybe a bit longer if you want softer peppers.


It made about 9 servings, which were not huge.  My husband and I each ate 1 1/2 servings for lunch. I froze 4 servings and put 2 in the fridge for later.  I think this is a good recipe for the McDougall plan.  There's no oil and barely any fat and it's vegan!

Ok, I'm off to eat some of my brown rice that's waiting for me in my rice cooker!  Winds are at about 30 mph right now...