I got these huge Portobello mushrooms last week at the market...apparently there's a big mushroom farm near here!  Anyway, I decided to stuff them today for lunch.  For some reason, they flattened out once they were cooked....is that normal?  I was hoping they'd stay rounded....no such luck.  At least the stuffing stayed in! 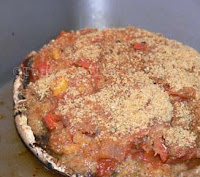 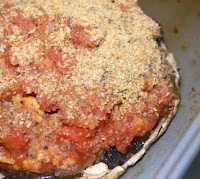 In a saute pan, put in a little water and add the onions and peppers.  Cook until soft.  Add the tomatoes and chick peas.  Crush the chickpeas as much as you can in the pan. Let cook for a few more minutes.  Then add the seasonings & yeast to taste.  Turn off the heat.  Lightly spray a roasting pan of some sort (something with edges, so the juice won't leak out) and place the mushroom caps in it.  Spoon the mixture evenly into the mushroom caps.  Mix the breadcrumbs with the seasonings and sprinkle over the top. Bake at 350 for about 15 minutes.

Ok, wish me luck and hope the power doesn't go out and Ida goes elsewhere!  If I still have power, I'll be cooking up a storm AND I'm gonna bake some bread in my new machine!