Over the past few months, there have been a few nights when I was just too tired to cook. So, S bought a couple of Amy's pizzas to keep in the freezer. I'd never had them before, as we don't often buy this type of thing. Here are my thoughts:

The first one we tried was the Amy's Roasted Vegetable Pizza-

I've gotta say, this was really delicious! I loved the flavor of the caramelized onions. Who needs vegan cheese? This was great without it. It was good and filling....we each ate half. 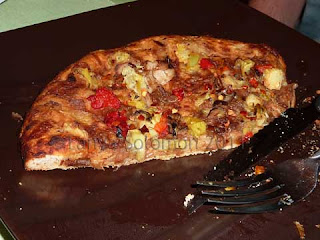 The second one we tried was Amy's Rice Crust Spinach Pizza:

Hmmmm, this one didn't quite do it for me. The crust was really "buttery" and flaky, not what I like in a pizza. This one was more like a rich quiche. So if you're in the mood for that, go for it! But if you really want pizza, I don't recommend it. The cheese didn't really melt. I put it under the broiler for a few minutes after it baked, just to try and melt the cheese. It helped some, but mostly just browned it. It didn't look like the picture on the  box! But it was pretty good....just not very pizza-like. 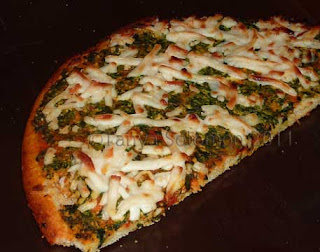 If you really want great pizza, you should try my own recipe :)

Have any of you tried Amy's vegan pizzas? Or any other frozen vegan pizza?