We were recently on a trip, which I'll be blogging about in a few days, and I had the most amazing barley stew ever! Ok, it was in an Irish pub and it was called a mulligatawny, but still.....it was awesome! And I knew I had to try and reproduce it. So I did, with a few more vegetables :) So for those of you who are still in winter temperatures, this will really warm you up! 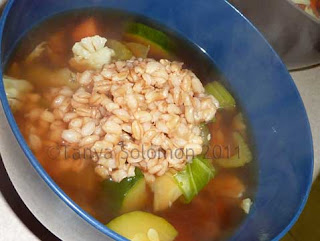 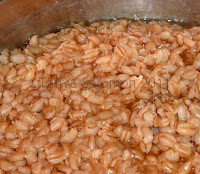 To cook the barley, put the barley and broth into a pot and bring to a boil. Cover and simmer for 1 1/4 hours or so, until cooked, but still chewy. 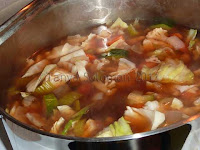 While the barley is cooking, add the garlic, onion, carrots, and celery to a large stockpot, along with 1/4 cup water. Heat on medium until onions are soft.  Add the broth, jalapenos, and cauliflower. Turn up the heat and bring to a boil, covered. Then turn it down to medium-low and add the zucchini. Let slowly boil (covered) for 5-10 minutes until the vegetables are mostly cooked, but not mushy. Add the cabbage and cook for another 3 minutes. Salt to taste. Spoon into a bowl and top with a large spoonful of barley.


*Note-you can use pearled barley, but it will take less time to cook (follow directions on the package).


Enjoy! I still have leftovers and will be eating them for dinner tonight, even though it's 80 degrees outside.