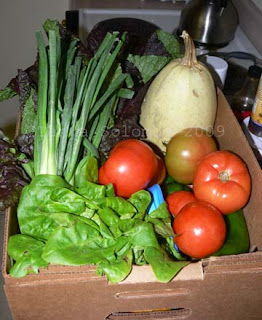 It's been almost a year since I was sick last....and guess what? I'm sick. Yup, I got that tickle in my throat on Saturday morning...and it stayed there. By Sunday, it was a major tickle, and today I've got phlegm. Sorry to be so gross about it. Last time I got sick, it lasted maybe 2 days..it was very quick. I got the tickle in my throat, and the same day my nose started running, then the next day I had a cough...and then...POOF....it was gone. Just like that. Cool, huh?

I think I'm on day 3, but hoping it will be gone soon. I've got the official cough today, which means it's moved and that's good. Just a bit of runny nose, but not like I used to get in the old days where I'd have tissues all over the place and had to take some sort of drugs for it.

Anyhow, it may be a coincidence, or not. You decide.  For the last two weeks or so, I've been trying to save money by cutting down on the amount of produce. We spend a ton at the grocery store and most of it is produce, including my daily broccoli, kale, carrots, zucchini....you get the idea.

At work recently, a colleague that sits next to me has been sick.  So I'm thinking that because I reduced my normal consumption of veggies AND whole grains, and was eating cheaper things like pasta and even some pre-packaged foods (although vegan), my immune system was compromised. Could this be? I suppose it could be coincidence or maybe it was just time for my body to have its share of "the common cold"....???

I decided to go back to my regularly scheduled eating habits, even if I AM buying 6 bunches of broccoli per week!! Am I insane?  I probably buy that much in a week, and a couple of bunches of kale, and maybe 4-6 bell peppers and well, at least 6 pounds of carrots (yes, each week)....S LOVES carrots and eats several per day.  Is this wrong?  Are we buying too much produce? It's two of us. I usually steam up veggies once per day and the other meal is either raw or roasted. And I eat brown rice or something similar almost everyday.

Do any of you shop at a bulk store, such as Costco or Sam's Club? How is the produce and is it worth it just to shop there for that? I mean, I'm sure I could use up 10 pounds of broccoli in a week! :)  Maybe I eat too much broccoli....

Help me out here....tell me I'm not insane for buying that much produce.  Or....tell me I am and tell me how to save money on produce.