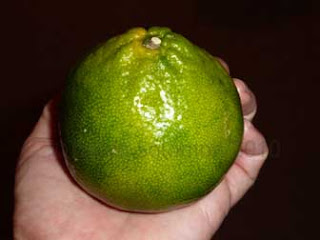 Guess what? It's the start of satsuma season!! I've missed those things. I'm not a huge orange eater, but I do like clementines when those are in season. Satsumas are good too and grown right here.

We finally got to the farmer's market again after 2 weeks without (due to travel, etc.): mustard greens, lacinato kale (it's no curly kale, but it'll do), apples, zucchini, cucumbers, sweet potatoes, eggplants, bell peppers, okra, mizuna/arugula mix, yellow squash, and brown rice. 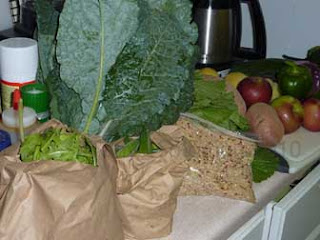 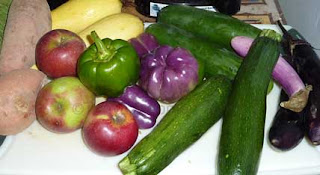 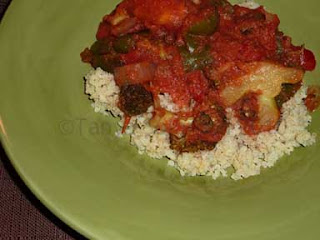 
Preheat the oven to 400 degrees. Put all the cut vegetables in a bowl and add Creole Seasoning. Mix well to coat. (watch the salt...this stuff can be really salty). Put the vegetables on a baking sheet sprayed with oil. When the oven is ready, put the veggies in. Set timer for 25 minutes.


Make the millet: Put the millet in a pan and put it on medium-high heat. Shake the pan every once in a while. When it starts to smell nutty (don't let it burn!), add the water and bring to a boil. Simmer, covered, for about 15 minutes until the water is absorbed.


After 25 minutes, stir the vegetables in the pan and put back in oven for 10 more minutes. When done, add them to a large saute pan on the stove with the 1/2 cup water.  Cook on medium heat.  Add the non-dairy milk, spices, and tomato paste. Stir well.  If it's too thick for you, add a little water. If it's too thin, add a little more "milk". Salt as needed. Serve over the millet.


Now onto the newest smoothie in my collection! 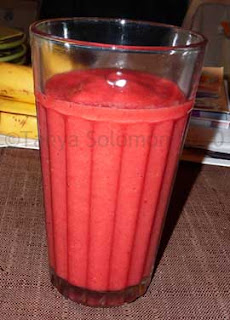 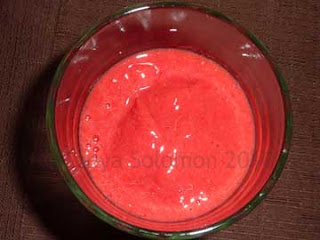 
Blend! It's pretty darn sour, but I love it! Feel free to add a little sweetener if you need it...or use sweetened cranberry juice. But I'm telling ya.....you should try it the sour way first!


It's gotten so cool here.  It's been in the low 60's in the morning! What? Yup.....brrrrrr. I've had to actually put long pants on and a real shirt for walking in the mornings. It's only in the mid-70's in the afternoons. I think Fall has finally arrived. Yay!  I will definitely be doing a Fall beer tasting in the next few weeks, so stay tuned for that. Next post will be my Atlanta trip post.