The other day I got the most amazing package in the mail! Yup, it was from Lindsay over at Cook.Vegan.Lover.  She hosted a care package swap and I signed right up.  This was my first one ever and I'll totally do it again...who wants to host the next one? I was so excited that my partner ended up being the host :) At first I was a bit overwhelmed and thought.....how will I ever impress her? My town isn't very vegan friendly.....what am I going to do?  But I figured something out and sent it over.

My awesome package from Lindsay: 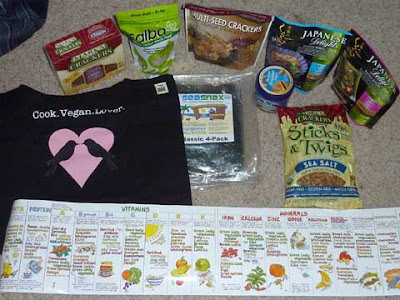 This package had the coolest stuff ever. Especially awesome, was Lindsay's own totebag (see picture).  I LOVE totebags and I look forward to using this one a ton.  Also in the box was a big long list of what veggies/grains/legumes have what vitamins and minerals needed, etc...it looks like it belongs on a classroom wall and I'm gonna put it up on my wall near the kitchen to have easy access.  There were tons of delicious looking snacks, including my favorite Mary's Crackers and Sticks & Twigs. I'd never tried the Sea Salt flavor but they're really good (yes, I've already eaten some of the snacks.....hahaha!!).  The MultiSeed Crackers are excellent too, made from brown rice flour.  And then there was this stuff called SeaSnax...looks like nori sheets (but with a little oil and salt) and I totally can't wait to try them. Here's to low calorie and delicious snack food :) Then of course there was some Blue Diamond Almond Butter.....seems as though all vegans it almond butter, me included, and one can never have too much of the stuff....keep it comin'! 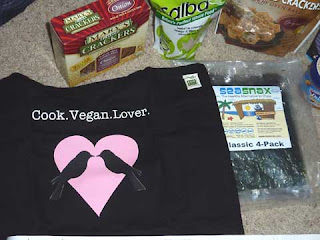 There was also this stuff called Salba....I'd seen it before but never bought it.  I looked it up...and you know what?? It's chia seeds!!!  Yay....that's good stuff and now I'll have to make all those chia recipes I've seen on all the blogs. 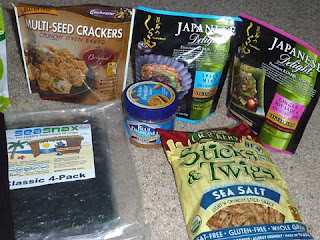 And last but not least....there were two bags of Japanese Kombu meals. Apparently you just add veggies and cook it up.  What's healthier than seaweed? These will definitely come in handy when I go back to work in TWO DAYS!!! Good for a quick and easy dinners :)

So again, thank you so much, Lindsay! Not just for hosting this care package swap, but for sending me the coolest stuff on earth :)

Coming up: Black Bean Polenta bake recipe and more of what I've been eating.