I'm back! Ok, we weren't really gone that long, but we had SO much good food.  We decided to visit Houston because my husband's family would be gathered there for a few days.  Had a good time with them.....hope they didn't mind the vegetarian cafe we dragged them to :)

Not a big Houston fan.  The place is just too big and too crowded with people and cars.  But, I had done my research for good vegan food and so that was the second reason for going there.  Since we were already that far, we decided to make a loop and visit San Antonio and Austin as well....I'd never been to any of these cities.

In this post, I'll show you the food finds from Houston & San Antonio, because Austin deserves its own post! 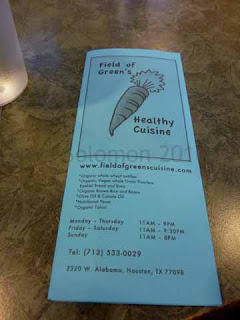 Not totally vegetarian, but almost. They do have a tuna and salmon dish, I believe.  You order at the counter and seat yourself.  My only complaint was that it took forever for our food to come out.  But, they did bring us some free hummus to start (I think it was a mistake, but I asked and she said to eat it anyway).  It had a vegan pesto on top...delicious.

"S's" aunt & uncle got the Veggie Burrito and Salad.  Didn't taste it, so I don't know how it was.  I hope they liked it: 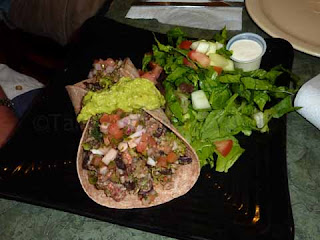 "S" got the Vegan Fish Taco Platter, which was excellent! 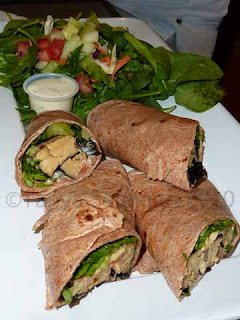 I got the Macrobiotic Platter (half portion only and it was huge), which was good.  Pretty plain, but good.  The steamed veggies didn't have any seasonings or anything, but I love my kale!  The tofu quiche was really delicious too. 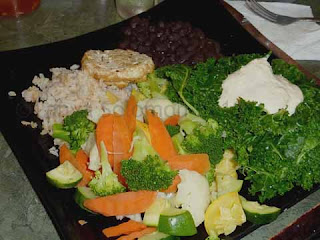 My platter also came with soup: Ginger Carrot.  Was ok....a bit oily for my taste: 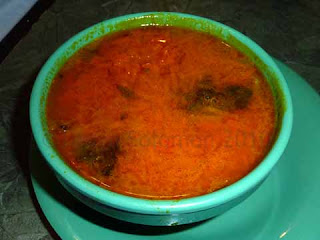 "S's" cousin got the Spinach Salad.....had cheese on it,so no picture :) Must've been good though, because he cleaned his plate. 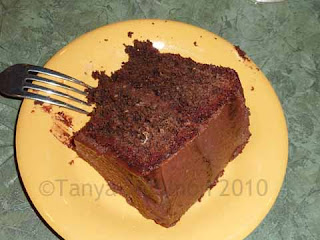 Next stop: Central Market in Houston (H.E.B.) An amazing grocery store! They had sooo many coffee beans to choose from and tons of bulk items and raw food items.  Lots of beer too. And the produce was so fresh! (not in the picture-apples & carrots & a 6-pack variety of TX Real Ale)Oat groats, sprouted buckwheat granola, Holly's oatmeal, sprouted sunflower seed snacks, raw pumpkin seeds, corn pasta, local coffee, and oat chocolate bars. 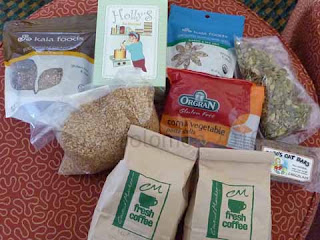 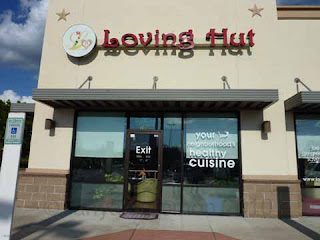 Very clean and bright place.  You order at the counter and then go have a seat and they'll bring it to you.  The seats were comfortable and the wait wasn't very long.  We ordered the Spring Rolls for an appetizer and they were delicious! I should've ordered an extra as my main meal :) 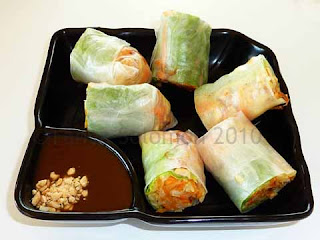 I had the Sweet and Sour Divine. I knew "S" wouldn't like it....he hates Chinese food. So I had it all to myself :) Also got the apple/carrot juice which was great. 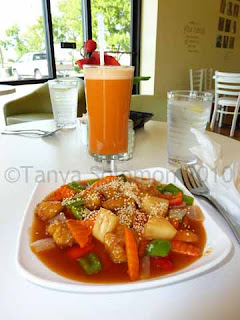 "S" ordered the Exquisite Curry, which was good, but mostly liquid with lots of noodles and maybe not enough vegetables. 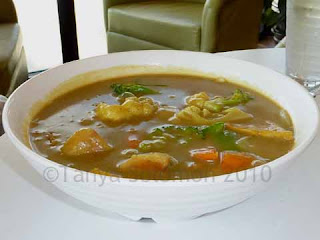 We had to go to Sweet Tomatoes once, because we don't have any where we live and I used to LOVE that place (also known as Souplantation in Southern CA).  I looked up the daily menu on their website and wrote down the few prepared salads and soups that were vegan and I was set to go.  It's an amazing salad bar, so of course most of what we ate was raw vegetables! No pictures...sorry...too busy piling up my plate with veggies.

Then off to San Antonio we went! First we stopped for lunch at Green Vegetarian Cuisine, which was just outside of downtown, in what looked like a residential area. They were so friendly!  Both the waitstaff and Chris (not sure who he was....the chef? The  owner???)  were super nice and very appreciative. 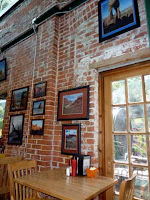 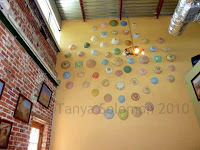 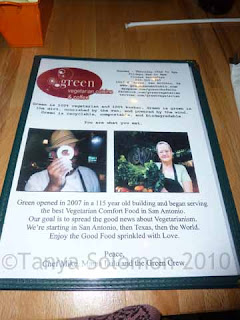 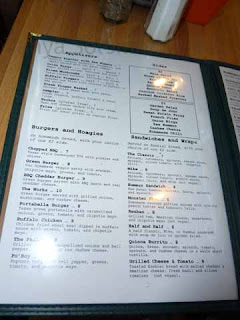 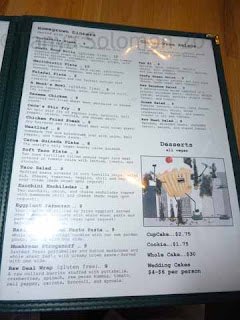 I had already planned on what I was going to order....the raw carrot noodles with cashew alfredo sauce.  But alas, they didn't have that on their physical menu....they said it shouldn't have been online.  That's ok, what I got was amazing! The Zucchini Enchiladas with a side of mashed potatoes and a side of collard greens, all of which were vegan :) 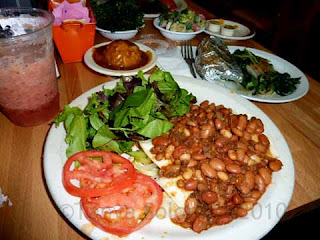 "S" ordered the vegan Carne Guisada with a side of kale and side of broccoli salad.
(he liked it a lot, but it was a bit too "meaty" for me) 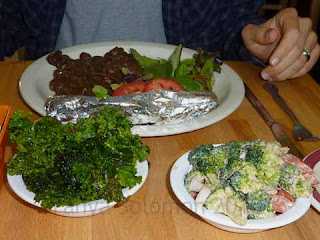 And for dessert, I had the Cookies N' Cream cupcake which was awesome! 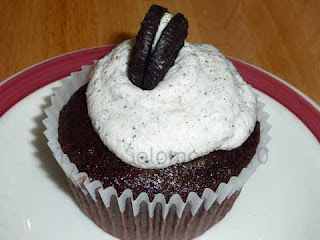 And that's it for San Antonio....we only spent the afternoon there (that's ok with me, wasn't too interesting)....saw the alamo and riverwalk.  Then continued on to Austin, where we focused more on raw food. Look for my part 2 post!