Now for the best part of the whole trip! WE LOVED AUSTIN!!  That's my new favorite city. Never thought I'd say that about somewhere in Texas, but....it is.  There are bars everywhere, lots of vegan/raw food places, it's a very walkable city, great texas beer, and nice walking paths along the river.  What more do you need??? Oh....a job.  Hahahaha.....there aren't any full-time orchestras in Austin, so that won't be happening.  But, if you know of maybe 15-20 kids who need violin or viola lessons......we're in! Sign us up :)

Now for the food.

Borboleta Gourmet/Ambrosia. Yes, they've gone through several names, including The Talkhouse.  But they're still there and open! The woman inside was really friendly and talked to us a ton about Austin.  Their menu is very limited, but very good. I think they only had maybe 4 items to choose from, for an entree. 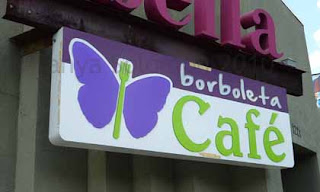 "S" got the Raw Lasagna, which was really tasty and so pretty: 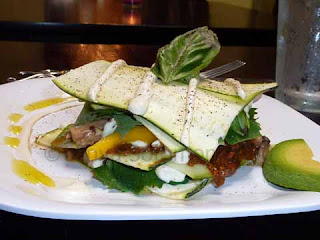 I got the Raw Pizza with kale salad. Delicious! The kale salad was pretty strong with the lemon juice, I think, or something sourish, but it was still really good. 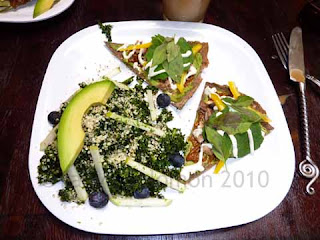 And for dessert, a mesquite ball and chocolate macaroon. Both tasty. 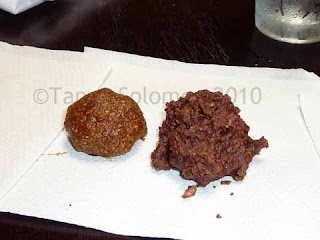 And although I didn't get any, here's a picture of their fermenting kombucha, which they sell: 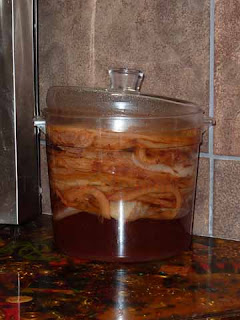 We walked a few miles to get to this place and it was definitely worth it. Besides, 6th street is awesome, so it's great if you feel like a beer along the way :)


Speaking of, we were dying of heat walking there and stopped in at an outdoor bar for water.  Well, I asked for club soda to go and she said they didn't have to go cups (geaux cups here in Louisiana).  We forgot we were not in Louisiana anymore.  So we sat down to drink it there.  She didn't even want our money!  I must've looked like I was about to keel over from walking 3 miles or so in 100 degrees.  Well we gave her a good tip at least....thank you whoever you are!!

The people in Austin are SO nice.

Mothers Cafe.  A friend of ours recommended this place to us and was supposed to meet us there, but came down with the stomach flu. Guess we'll meet up with them next time!  Anyway, this restaurant was awesome.


We started with a cup of the Tomato Artichoke Bisque (vegan), which was out of this world!! 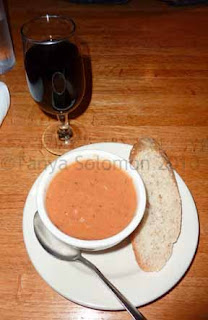 (and that's "S's" wine)
"S" ordered the Spicy Tempeh Enchiladas, which were excellent: 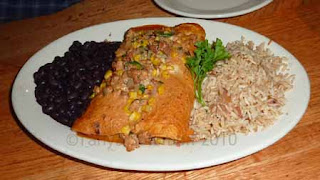 I ordered the Vegetables Rancheros....also delicious. That sauce is awesome! 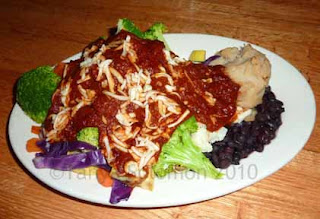 And we couldn't skip out on dessert.  But we even had to take some of the food back to our hotel! So I got the Belgian Mocha Fudge Chocolate Cake to go :) WOW! Delicious!! 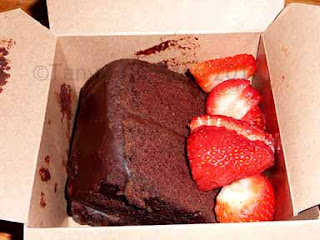 The menu here is all vegetarian but shows you what is vegan and what they can veganize for you, which is a lot of stuff.  And the room in the back is really great.....a fountain, lots of trees and greenery.  Nice staff too. 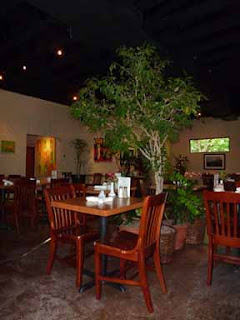 Beets Living Foods Cafe.  Huge menu.....very bright, clean, and modern looking.  You can park free in the garage of the building, so that's a plus.  It's not far from Borboleta Cafe. The waitress was really nice and very smiley. This is raw vegan place. They also sell a few items (yes, I bought a shirt) like raw books, shirts, powders, etc... 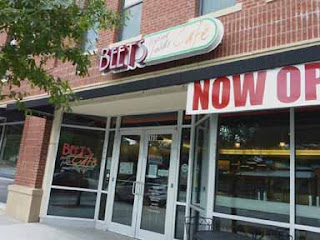 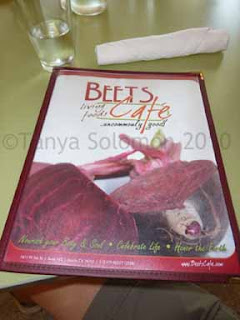 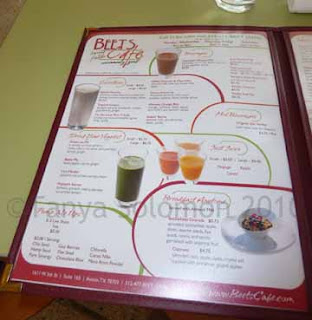 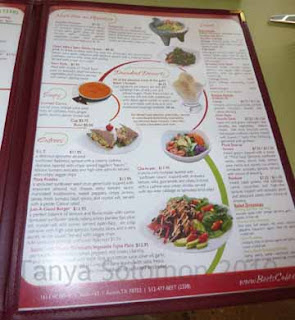 We started with their special: Curried Carrot Chips with Tahini dip. So good. 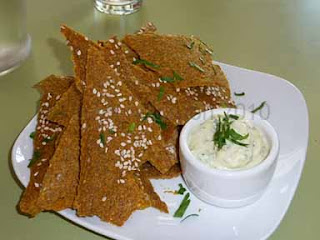 "S" got the Portobello Fajita Plate with a side of TexMex Cabbage.  Tasty: 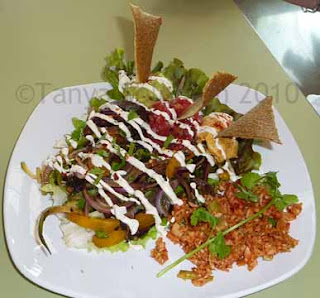 I ordered the Asian Style Noodle Salad with kelp noodles. It was almost too pretty to eat! But it was absolutely delcious and hit the spot on a hot summer day: 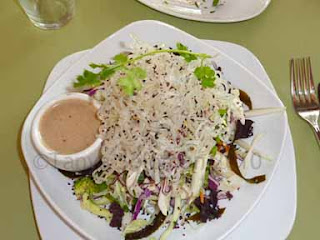 More pictures, because it was so pretty: 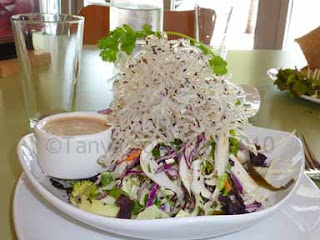 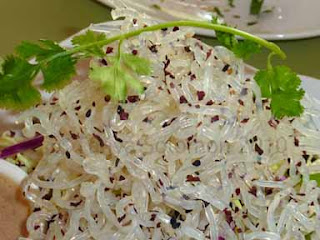 Got a brownie for dessert, but they had way more stuff....just didn't want to overdo it this time: 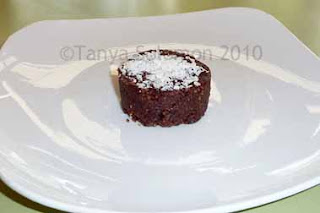 And the last place we ate was Daily Juice Cafe, on our way out of town. Also a huge menu.  We ordered what the woman behind the counter suggested which were both really great.


We got the "Tuna" Boat....really delicious, but probably high calorie! 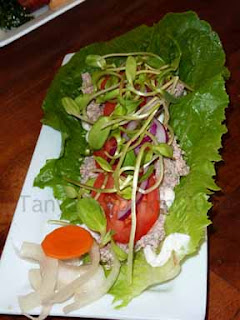 ...and some sort of Enchilada, which was also awesome (you can order one or two, we got one): 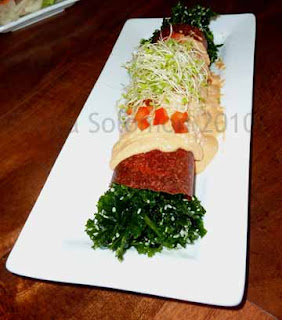 I also got the Chocolate Prana smoothie...tasted like liquid chocolate mousse....lots of coconut flavor. 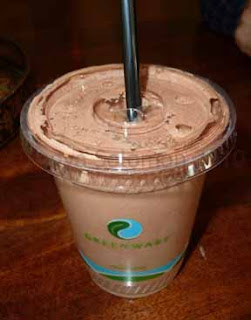 It was a good drink/dessert for the road!
Our last morning, we walked to Little City Espresso Bar, near the Capitol building on Congress. Very nice place and really good coffee. They even played Queen the whole time we were in there!! (yes, I love Queen)

PS-I forgot....we walked to Aster's Ethiopian too (about 2 miles from our hotel).  Looks a bit like a "hole in the wall" kind of place, but the people were really nice and the food was great! They've got a vegan/vegetarian combo. Picture was taken on my phone: 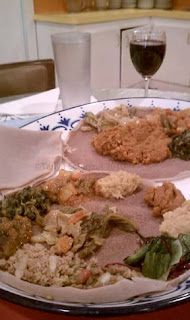 BEER:
Texas has great beer! Who knew??
While in Houston,  I was able to have Saint Arnold's Amber on tap at our hotel.  Very good session beer.
Saint Arnold's also has a Summer Pils that's a good session beer (tried that at the Ginger Man in Austin). And I brought back a bottle of their Wheat beer, which I had last night and it was excellent!
512-yes it's the Austin area code, but it also happens to be a great brewing company!
A kind gentleman at Darwin's Pub on 6th street told us we should try the Ginger Man on 4th and Lavaca for some 512 beer (I asked if they had any). Thank you, whoever you are. I told you, people in Austin are just too nice. So, back to the beer.
512 makes an excellent Pecan Porter that was recommended to us by several locals. Thank you, Ginger Man, for carrying quite a few 512 beers for us to try :)
They also make a very refreshing Wheat, called a Wit and a very hoppy/grapefruity IPA. Both very good!
Real Ale-it's real and it's good.  I had picked up a 6-pack variety when I was in Houston, without having tried any, so this was a good opportunity to have some (at the Ginger Man bar).  Actually, I'd had their Fireman's #4 Blonde Ale at our hotel the previous night.  Another good session beer....not too strong, but good. We had their Hans Pils (one of their summer seasonals) and that was pretty darn refreshing! Their Rio Blanco Pale Ale is one of their year-round beers.....pretty grapefruity.  All good.
Live Oak: yet another local Austin brewery.  Yup, they have a ton.  We had their Big Bark Amber Lager at the hotel and it's a darn good beer. Hmmmm, I thought we tried more at the Ginger Man, but I can't remember now.....too many beers?? They did have 36 taps and it was raining in there, so we were in there a while.
The Ginger Man pub. It's where we tasted most of those beers.  The man behind the counter was oh so helpful and very friendly.  We tasted a lot, we had actual pints as well (what? did you think we'd just go in for free tastings?? Although that doesn't sound half bad...)
And last, but not least......I broke down and went to Whole Foods.  I guess Austin is the mother of all Whole Foods.......we ate there one day for lunch.  I went back on another day to pick up a tote full of goodies.  Expensive goodies, but.......here it is: 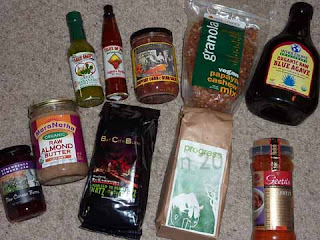 (No, those 3 TX hot sauces are not from WF.  Vegan granola, agave, raw almond butter, local coffee, Geeta's Jalfrezi sauce-amazing stuff, and local Strawberry Almond jam) Oh, and I picked up that one bottle of St. Arnold's beer there too.
And that's all....wow....that was a lot of food....and beer.  But seriously, Austin is my new favorite place. Who wants to hire me?
Upcoming giveaway: Dr. Neil Barnard's "Get Healthy, Go Vegan" book!!
Eat smart,
T.
Posted by Tanya at 7:17 PM