We just got back from a big trip to Europe. We were in Switzerland for 2 weeks, then had about 9 days between the Netherlands and Belgium. We had our family reunion in Switzerland. All three of us kids were born there and my brother is now working there, so we thought this was a good time to have a reunion, since we're rarely together in the same place. We all live very far apart and it's difficult to coordinate get-togethers. And since my dad will be celebrating his 80th birthday this year, we also threw him a party there!

We had a long layover in Chicago O'hare, but we found a Saladworks!! We love that place: 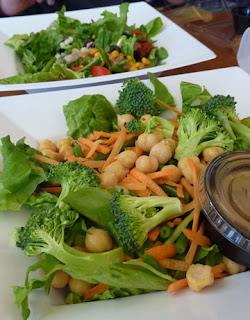 First of all, we flew American Airlines. I called in advance to order a "vegan vegetarian" meal. The woman on the other side guaranteed I would have exactly that. I even asked to make sure it wasn't just vegetarian, that it was vegan and she assured me. Well......so much for all the planning.  Our "veg" dinner had cheese on top. Luckily, it wasn't a ton (although it was melted in), so I could scrape off the top layer and eat the rest, which was actually pretty good. 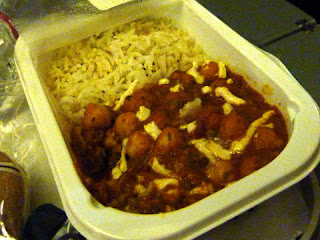 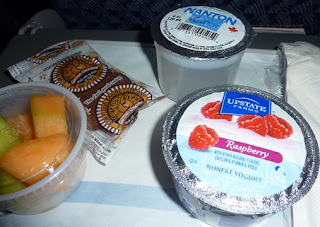 The first two weeks were spent in a chalet in Switzerland. We had a kitchen and access to grocery stores, so it was pretty easy for us to eat. 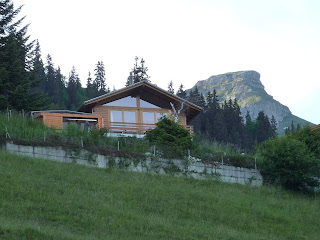 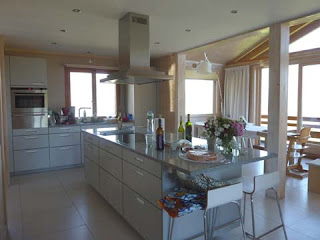 Here are some of the things I found:

Almond milk (from the Sunstore in the Geneva airport/train station) with Muesli: 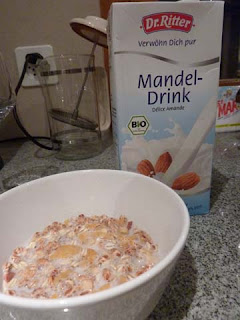 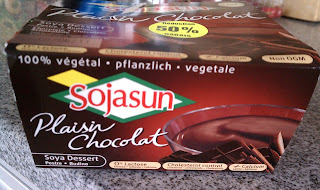 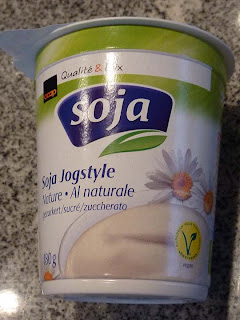 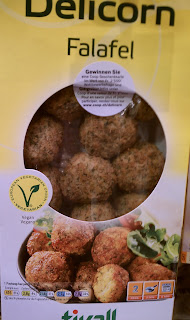 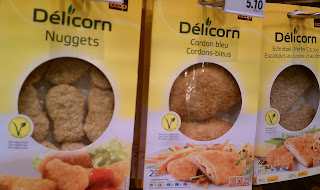 The falafel atop some of my cooked veggies/potatoes with tahini sauce: 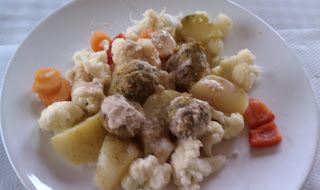 I made some of my usual dishes of millet, cooked vegetables, brown rice, etc....took some of my leftover couscous salad up to the mountaintop with me: 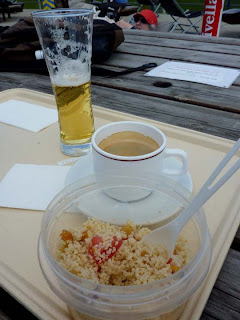 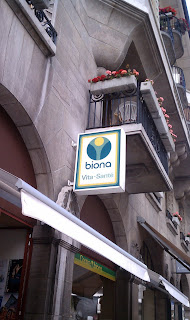 They had everything, but I was only a day or so away of leaving Switzerland, so I couldn't splurge. They had all sorts of grains, nuts, seeds, nondairy milks, nut butters, etc....heaven. If you're in Vevey, you must go! 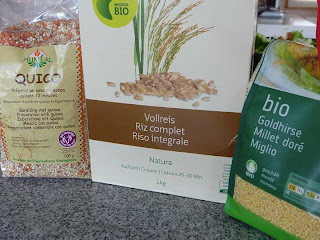 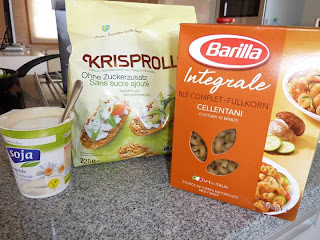 We didn't eat out a ton, obviously. There was a nice place in the town we were staying (Leysin) called La Lorraine. We were able to get a nice vegetarian pizza without cheese. Although I had to give all my olives and capers to S, since I hate them: 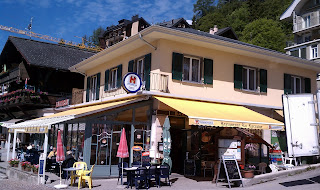 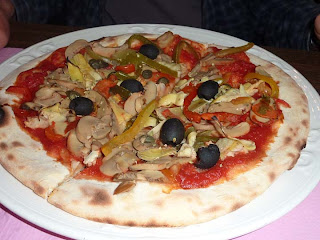 And in Les Diablerets, we had the most expensive, but delicious, plate of cooked vegetables :) On the menu it had cheese all over it, but we ordered it without: 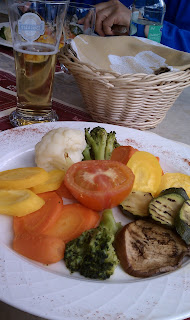 And in Vevey, we found a place (appunto in the big Manor shopping center) where you could create your own salad and they'd put it together for you: 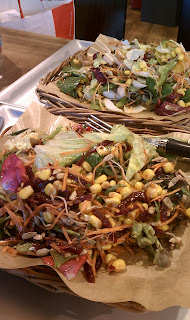 Unfortunately, they didn't have separate vinegar, so we had to get a light sprinkling of a vinegar based dressing.

On our way out of Switzerland, we stopped in Zurich for a few hours and I found this great restaurant: Tibits. It's a pay-by-weight kind of place, as were several of the veggie places we ended up eating at: 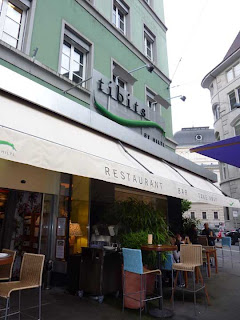 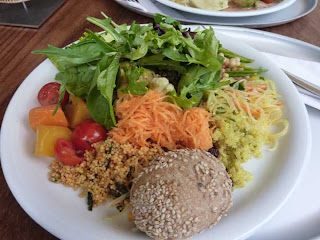 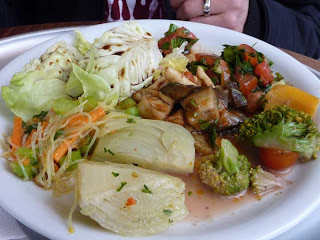 This place was awesome! If you get to Zurich, I highly recommend it. Everything is marked, so you can easily find all the vegan items.

Most places in Switzerland didn't seem to have soymilk, so I was able to carry some with me on occasion, otherwise I drank the coffee black, which was pretty good!

Here are a few extra pics from Switzerland--- 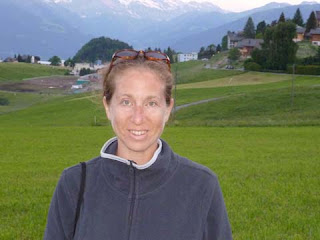 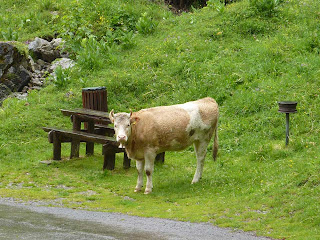 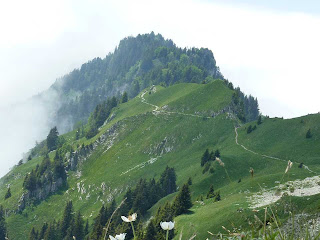 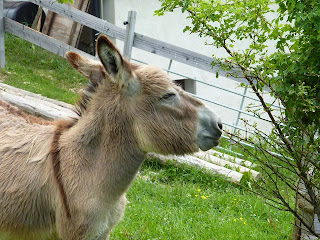 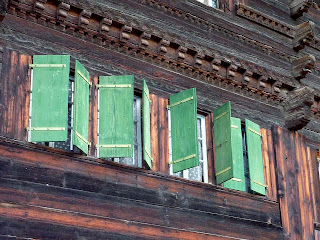 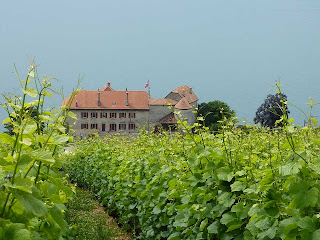 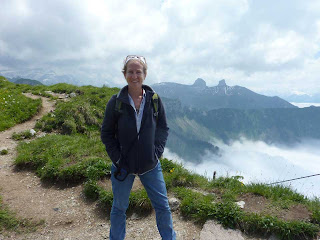 By the way, everything in Switzerland says "bio" this and "bio" that.....I think it means organic. And the stores usually label all of their produce to tell you which country it's from. We were able to get a lot of Swiss vegetables and fruits. Yes, we landed there during the whole e-coli alert. So we were trying to avoid produce from Spain, then from Germany, etc....but, we didn't get sick!

Next up: The Netherlands and Belgium!!