Last week, we had a concert on the Northshore in Covington, LA. I found a nice little place for us to eat afterwards: Toad Hollow Cafe.  It's right in the center of town and pretty small. They've got just a couple of outdoor tables, but they mostly seat only two and we were four, so we had to sit inside. 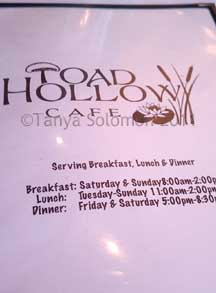 They seemed to have some nice vegan options on the menu, including hummus, miso soup, salads, tempeh tacos (w/o sour cream), and a few other items. The full menu is on their website. The tempeh reuben looked good, but I wasn't sure if it was vegan or not (ok, I didn't ask...). I ordered the Asian Salad, which was a pretty basic salad, not particularly Asian at all, outside of the peanuts.  The dressing was good. It was ok. No picture, because my phone took a really fuzzy picture of it (hahaha, it wasn't me, it was the phone!).  S ordered the tempeh tacos: 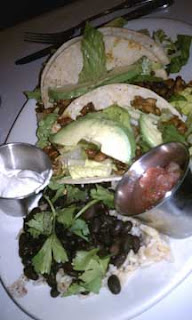 He liked them a lot.  I thought the tempeh filling was way too salty. But...I really loved the side of black beans and rice! (might just order that next time). I got a bottle of local beer, they had no taps, unfortunately, but it was still good: 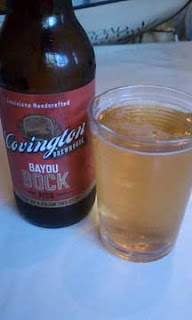 And the dessert was to die for! VEGAN CHOCOLATE MOUSSE!! Yup, oh so tasty. I'd go there just for that: 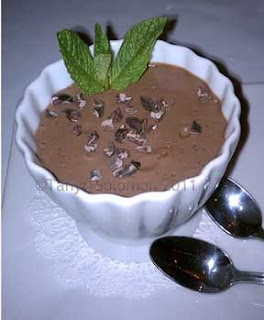 If I were in the area, I'd go back and have that mousse. I may even try something else, like the tempeh reuben, if it's vegan. The service was VERY slow, but it was pretty packed and the town had some big event going on. I'm sure it's not like that normally. The waitress was very friendly, so that helped.

Back in New Orleans, there's a relatively new Ethiopian restaurant in town: Cafe Abyssinia. We went there yesterday. It didn't open until noon, so we walked around for a while. We were the first ones in there and had our choice of tables. It's a pretty small place, and it did fill up by the time we left. There was also only one waitress, but she did an excellent job of taking care of all the tables! And she was very friendly and helpful. 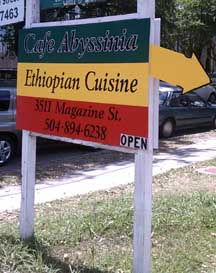 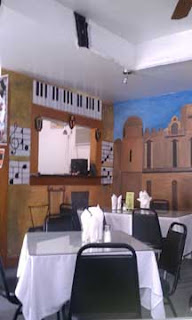 We started by sharing the Beet Salad (vegan), which was delicious! 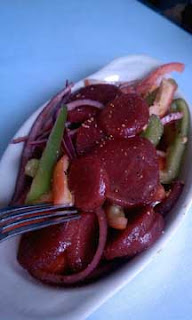 S and I shared the Veggie Combo (all vegan), which was served atop injera. Some extra injera also came on the side. Really excellent.....albeit a bit oily. 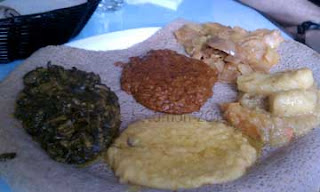 I believe they also have a few vegan appetizers....so definitely check it out if you're in town!

Hope you all had a nice Earth Day yesterday....you can celebrate all year round :)