Ok, so I'm a little late on the latkes.....don't hate me.  I was trying to find the right combination, based on my online research.  And they pretty darn good!  A hint mushy inside, because I think I still need to get the exact cooking right.  I don't deep fry, so they take longer to cook.  Perhaps a much lower cooking temperature? 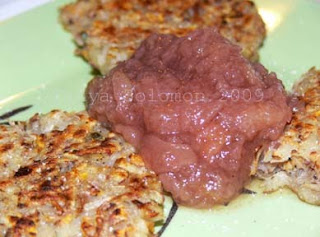 So here's my latke recipe. It made about 9 small/medium latkes. 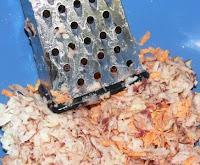 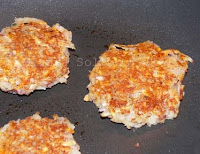 Grate the potatoes and then make sure you dry them well, with paper towels.  Put in a bowl and add the onions and spices.  Add the Egg replacer(pre-mixed with water) and the flour and mix well. Heat a pan on medium heat.  Spray with oil.  When hot, add large spoonfuls of the potato mix and flatten with a spatula.  I covered mine, so the steam would help cook them faster.  You may need to lower the heat if they are browining on the outside, but not cooking on the inside.  Takes a bit of skill, and I still need to perfect mine!
When done, put them on paper towels to blot off extra oil. Serve with applesauce. 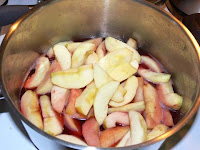 I got a good recipe for Cranberry Applesauce from the Clean Food cookbook.  It was a bit watery, so I think next time I'd use a bit less liquid.....or more apples! I used Gala apples.....they didn't seem to be the most flavorful. If you know of a really good cooking apple for this, let me know.

from Clean Food: Sweet Potato and Parsnip Pancakes
from Cooking For a Vegan Lover's blog: Potato Latkes
from Vegan Food; More than Tofu and Sprouts: Sweet and White Potato Latkes


If you know of any other vegan/gluten free/vegetarian recipes for latkes online, let me know and I'll post them here.

And on another note, I got an amazing package from my sister today! She sent her homemade Cran-Apple Butter, Blueberry Jam, Cran-Nagoon Jelly and some other cute stuff. Nope, I didn't know what it was either.....so I had to look it up.  A Nagoon is a sort of berry, and these are from Alaska, which is where my sister lives! So thank you Lizzy!!

That's all for now...but I'm on vacation as of today, so there will be more posts in the upcoming weeks!!