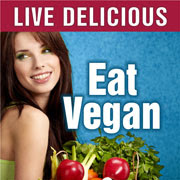 Thanks again to Book Publishing Company for sending me some books for review.  If you'd like to win some of these books, visit their site here.  They offer lots of vegan, vegetarian, and raw books all in one place.

I wasn't sure what to think at first, as this book was published quite a while ago, in 2000.  And as you know, things change very quickly.  But I found, as I went through it, that most things in the book are still accurate.  Nutrition is always changing, as are "daily allowances" and new finds for foods with certain vitamins and minerals.  That said, there's really a lot of great information in this book. Yes, there may be more non-dairy milks on the market today, as well as more foods that are fortified with B12 and D2, but the general idea is the same.

The book discusses where you can find various vitamins and minerals needed in several chapters. And it really goes into detail on several accounts, from calcium absorption, to iron deficiency, and covers pretty much any vitamin/mineral I can think of!! It gives suggestions of what food sources you can find them in, as well as giving you the RDA (which over time, has changed).

Other big topics in the book cover veganism during pregnancy, as well as through adolescence. It also covers the later years in life and how your needs change. The chapters near the end cover being overweight and describe various "weight loss" diets, the good and the bad. Also mentioned, are the topics of being underweight and eating disorders.  These are always important factors when you're talking about nutrition.

There really are a lot of "numbers" in this book!  Tons of tables and lists of foods and their various nutrition information....maybe a little too much detail for me (as I'm not a nutritionist and don't really know what some of them mean).

I do recommend this book if you're considering taking on a vegan diet or even if you're already eating a vegan diet. There's a whole lot of information in here that can be quite useful, especially if you're really taking care to get every single vitamin & mineral that your body needs. Again, the book is over 10 years old and there have been more discoveries made since then and more vegan food has appeared on the market, so just keep that in mind.

If you'd like to win one of these books, go over to the Live Delicious, Eat Vegan campaign site and enter!