Dining at Emeril's (don't do it) 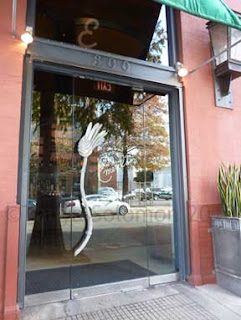 About a week ago, a friend had a birthday lunch at Emeril's of New Orleans.  I scanned the menu a week before, wondering what I was going to be able to eat there.  I ended up calling them a few days before the reservation and asking about vegan options.  The woman on the phone was very nice and asked me to look over the menu and see what they could "veganize". Well, everything was served around some sort of hunk of meat or fish, so I picked out some items they were served with, like grilled vegetables, succotash, etc...and said they could base something around that. I also told her I didn't want any pasta (that seems to be the go-to vegetarian dish everyone wants to make, but it's just not that healthy and too high calorie for me).  She agreed and said she was making notes in the reservation, just to mention it to the waiter when we arrived.  No problem! 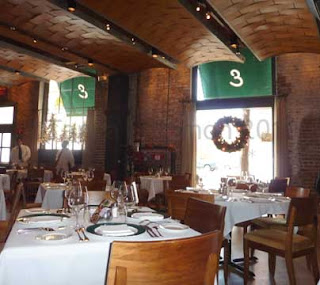 So, dining day came.....we arrived. Really nice looking place. They had a big table set up for 12 or so. It was all so fancy! They had some good beer and wine on the menu, so S ordered some of that to start. When the waiter came around to take our orders...we were last.  I mentioned that I'd called ahead and ordered two vegan dishes (I assumed he'd know or just check the reservation on the computer). He said "Ok, two vegetarian  dishes."  Again, I assumed he'd check, so I didn't have to re-explain they were to be vegan and what that is, etc...S said right away after he left that we weren't going to be getting vegan food. He thought that since the waiter said "vegetarian" it would be only vegetarian, and not vegan. I didn't think that at all.  I just didn't want to have to go through the whole explanation about what vegan is, so I didn't correct him. Like I said before, I thought he'd go check the "notes". We didn't order any appetizers or salads, because we knew we'd have to ask for no this and no that, etc.  We watched everyone else eat their soups and gumbos.....they enjoyed them.

The main courses arrived.  The waiter brought out two of the exact same dishes.....S was right.  They were NOT vegan. I saw right away there was cream sauce all over it and breaded this and that.  I asked the waiter, and he took mine away to be replaced. S ate his, because he hates being a pain in the butt at restaurants. As everyone was finishing up their meals, the waiter came back with my newly veganized dish of the same thing that S got. (and no apology) No breaded stuff, no cream sauce...yay! It looked pretty good, although not a ton of food.  I picked off the soggy sweet potato chips from the top of the cooked vegetables. They were tasty, but soggy.  I really did like the vegetables...they were a bit sweet, but had a nice flavor.  Then I put the spoon into the succotash and then in my mouth...oh.......the salt!  It was so salty I could barely eat it.  Is that their solution? If they can't put cream or butter on it.....they have to just add a ton of salt?  Very disappointing.  Anyway, S ate the rest of it, since he likes salt.  And those toasted bread slices......I think they had butter on them, so I didn't eat them.  When they came around to take dessert orders, the waiter immediately said they could make up a fruit bowl for me. So I obliged.  It was actually very good. Fresh apples, raspberries, blackberries, and blueberries. No added anything. Great just the way it was! 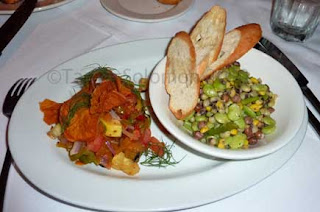 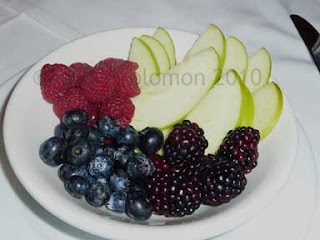 You know.....I expected more. But maybe I shouldn't have.  It's a fancy restaurant and people enjoy the food there.  They don't even have vegetarian options on the menu.  I guess it's not their fault for what ended up on my plate.  They weren't trained to cook vegan/vegetarian food, so why should they make any?  I guess it's my fault for asking them too. They were only trying to accommodate me.  Well.....not really.  Something must have gone wrong between the conversation I had on the phone and the notes that I guess never got to the waiter or the kitchen.  So there was really no point in my calling in advance. It did no good whatsoever.

I won't make the mistake again of trying to get a fancy place to make me vegan food here in New Orleans. It's just not worth. It's not a vegan or vegetarian friendly town and I just have to get used to it.  I know where I can eat around town and how to order at those places.

(and S said his version wasn't good at all....cream sauce and all)

Sorry Dave!!! But thanks anyway, and we had a good time:)